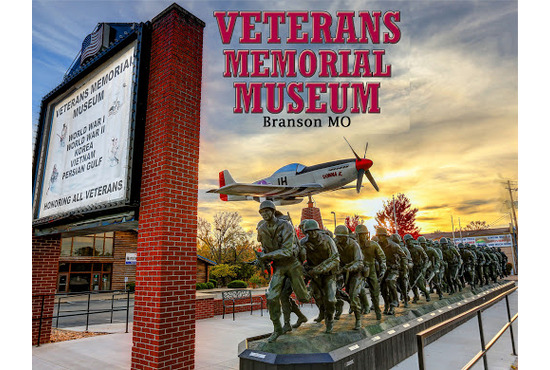 The Veterans Memorial Museum in Branson, Missouri is a national tribute to the brave men and women who defended our liberties during the 20th Century. A visit to the museum is a powerful, emotional experience. As you wander the great halls of the museum you’ll be captivated by the stories of these men and women who gave us so much. The museum is filled with the most incredible collection of wartime exhibits covering the heights and depths of human experience.

For those who lived through these wars the memories brought back are vivid and overwhelming. For those that viewed the 20th Century wars through the prism of history, the museum is awe-inspiring.

You’ll be fascinated and thoroughly humbled by this memorial to our veterans. The vast array of exhibits causes reflection and creates an intense curiosity about the personal experiences of the men and women who lived in these uniforms, fired these weapons, lived as a POW, wrote these letters home, wore these medals, played this battlefield organ, flew the planes, rode the motorcycles, and served our country so well.

The Veterans Memorial Museum is composed of ten great halls covering the wars and conflicts fought during the 20th Century. Circulation and viewing starts in the World War I Hall, progressing through World War II, Korea, Vietnam, Desert Storm, and more.

The names of the men and women killed in action in WWII, Korea, Vietnam, Persian Gulf, and recent conflicts of the 20th Century are displayed on the walls of the halls.

Must be presented prior to purchase.

Based upon availability.  Reservations are recommended.